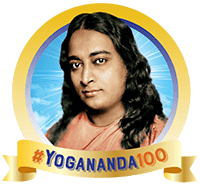 On September 19, 1920, an orange-clad swami arrived in Boston harbor and stepped off the ship, City of Sparta.

Five years later, he was one of the most popular speakers in America, drawing thousands of eager listeners to his talks in major cities and filling halls to overflowing. “A Hindu invading the United States,” the Los Angeles Times reported, “… preaching the essence of Christian doctrine.”

26 years later, he published Autobiography of a Yogi, now a spiritual classic with millions of copies sold. By this time he had taught Kriya Yoga, an advanced meditation technique that he called the “airplane route to God,” to thousands of students around the world.

Today, his meditation techniques, interpretations of scripture, and suggestions for daily living reach people in every corner of the world through books, videos, classes, and at retreats. Documentaries, movies, and biographies have been based on him, and he is often called the “father of yoga in the West.”

Ananda Portland and Ananda worldwide will be offering online events as well – we will post more as plans come together.