91ST ANNIVERSARY OF HIS BIRTHDAY 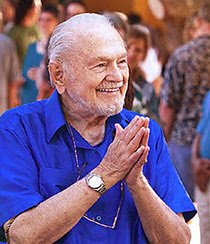 Swami spent more years of his life in search of God and in the development of his attunement to God and Guru. Reading The New Path is a wonderful way to get close to Swami. Or listen to the music of Ananda, to know him more deeply.

There are three occasions featuring Swami that stick out in my mind as I write this.

The first is when Swami returned from India to visit the Ananda colonies, ending up at the Village for a portion of the summer months, when it was too hot to be in the East.

During these months, Swami would host weekly barbeques at the Crystal Hermitage. We would be sitting in groups around the patio, balancing plates with veggie-dogs and chips on our laps. Toward the end of the evening, Swami would read to us.

How he loved reading PG Wodehouse. He would laugh and laugh, sometimes bringing tears to his eyes. It was a joy-filled time. A great blessing.

The second time, was during those same summer months at the Village, there would be a concert at the amphitheater. Swami loved music. Our Ananda Choir as large as possible, ready to sing.

Towards the later years, Swami would sit directly in the center of the stage, with the choir surrounding him. As they would sing out with joy, Swami sat there with his eyes closed…in pure bliss.

The third, and last, was after his passing. I think of this often during the springtime, as the heralding for the tulip weekends begin.

My daughter, then seven, was walking down the side entrance steps into the Hermitage. She stopped, looked out over the sea of tulips. She raised her arms out and encompassing the gardens whispered, “Momma, Swami is in all the tulips.”

About the Author
Madhavi Eby

Madhavi Eby and her husband, David Eby, came west to Oregon in 1996 and feeling right at home, found and joined the Ananda Portland family. And have lived in Ananda Communities ever since. Moving to the Ananda Village (Nevada City, CA) in 2001, she joined the staff of Crystal Clarity Publishers working with others in helping to spread the message of this great work of Yogananda and Kriyananda.
Read more