A world of laughter, of tears. A world of hope, of fears. So much that we share, it is time we are aware that it is a small world after all.

One Moon, One Sun. A smile means friendship to everyone. Though mountains divide, oceans are wide. It is a small world after all. (Told ya!)

Three hundred singers stood throughout the sanctuary of the Trinity Church, in a “theater-in-the-round style” of presentation, and they sang It’s A Small World. Complete with whistling. And there I sat realizing that in fact, it is a small world…after all…(tee hee). 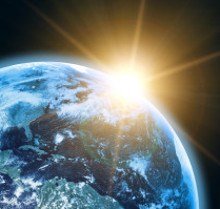 Maybe one would expect this kind of language in the 60s. They would be writing about the smallness of the world. Flower power. Oneness. Unification. (This is an entire article in itself!)

And then there is the mention of laughter and hope on the one hand, and tears and fears on the other. Maya, duality.

They wrote about the moon and the sun, making it feel as though we are at the center of our universe. Though now with increasing expansion of consciousness in all directions we know that there are many more galaxies. And even this concept is expanding. Circumference nowhere, center everywhere!

And yet this smallness, it is something that I realize every time I go away. Anywhere! And there I meet someone of like-mind, like-practices, like-beliefs. It is a small world.

I realized this in Israel, after meeting some dear souls, one that feels like my closest sister. Seeing old friends in Italy, then in California, and then again on the beach in Tel Aviv! Or meeting new friends that I feel like I have known forever while we were on pilgrimage—they live in the midwest—and then seeing them again at an event here in Laurelwood, OR. Boy it really felt like a small world.

I know it again, when I’m in any Ananda center, colony, retreat. There are my gurubhais, doing what all my gurubhais around the globe do. Pray, meditate, serve, spread joy, eat and laugh. Confirmation of a small world.

That a group of 300 kids can stand on stage and smile, feeling the joy of singing a song that many of them under “normal circumstances” might not be caught dead signing at home. And yet, they were smiling, singing and enjoying the sheer fun of performing this song.

These 300 kids that stand there, a part of our future, this world’s future. They sang with joy and strength. Signing with lightness and laughter. It filled my heart.

So yes, it is a small world, my friend. It is small because so many things can happen to bring us together. We can share beliefs and ideals with complete strangers. Because we are all children of the Divine. And because, don’t cha know, that wherever you go…there you are! It is a small world. After all.

About the Author
Madhavi Eby

Madhavi Eby and her husband, David Eby, came west to Oregon in 1996 and feeling right at home, found and joined the Ananda Portland family. And have lived in Ananda Communities ever since. Moving to the Ananda Village (Nevada City, CA) in 2001, she joined the staff of Crystal Clarity Publishers working with others in helping to spread the message of this great work of Yogananda and Kriyananda.
Read more