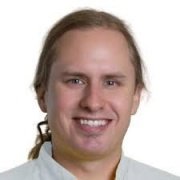 Jitendra Guindon is a certified Ananda Yoga and Meditation Teacher with Yoga Alliance. He serves as the assistant director of Online with Ananda, home of Ananda’s Virtual community, online courses, and live broadcasts. Through Online with Ananda, he shares the ancient teachings of yoga as brought by Paramhansa Yogananda and acts as a spiritual counselor to hundreds of truth seekers around the world.

Jitendra is one of Ananda’s most popular yoga class and retreat leaders due to the depth of understanding and heart centered energy he brings to each course and session.

Jitendra’s spiritual journey began in 2006 when he read Autobiography of a Yogi. He was initiated into Kriya Yoga in 2009, and has dedicated his life to sharing the teachings of his Guru, Yogananda. He has been deeply inspired by witnessing the power of Yoga and Meditation to transform the consciousness of people all around the world, and has trained himself to help this expanding awareness grow.

In Rhode Island, where he grew up, Jitendra helped lead the Ananda Yoga and Meditation Center. Expanding outward to Boston and New York City, he has taught meditation, yoga, and chanting in such diverse settings as yoga studios, colleges, high schools, and rehabilitation centers.