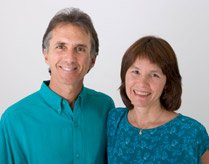 Nayaswamis Krishnadas and Mantradevi are long-time teachers and ministers at Ananda, and currently serve at the Expanding Light Retreat at Ananda Village. Before returning to the Village, they served as co-directors of Ananda centers and communities in Dallas, Portland, Seattle and Los Angeles.

Krishnadas and Mantradevi lead pilgrimages to holy spots throughout the world and conduct retreats around the U.S. Krishnadas also oversees visiting groups to the Expanding Light, and Mantradevi is also a successful artist, creating devotional and inspiring paintings.