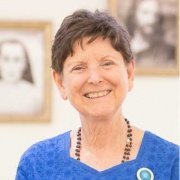 About Asha Nayaswami: a brief biography

Asha was a spiritual seeker since her early youth. While studying at Stanford University in 1969, she heard Swami Kriyananda speak for the first time. “I knew the moment he walked into the room that he possessed the consciousness I had long been seeking.”

She soon became a founding member of the new community Swami was starting near Nevada City, California, called Ananda Village, based on Yogananda’s dream of world brotherhood colonies for “simple living and high thinking.”

Swami Kriyananda placed Asha in the role of teaching and counseling soon after her arrival. She also served as Swami’s correspondence secretary and personal assistant for many years.

She has served as one of the spiritual directors of Ananda Palo Alto since 1987, guiding the development of Ananda’s work in the San Francisco Bay Area, including helping to launch Living Wisdom Schools and Ananda Farm, and supporting a large staff and volunteer team involved in East West Bookshop, Ananda Community, Ananda centers and meditation groups in the Bay Area, Ananda music, and a vital, lively theater arts program.

Asha is a nayaswami. In 2009, she took vows in the renunciate order that Swami Kriyananda founded. (“Naya” means “new” in Sanskrit). You will often recognize a nayaswami by the rich blue color they wear. “Blue suggests calmness, kindness, and an expansive consciousness,” writes Swami in A Renunciate Order for the New Age. This new renunciate order is very much like the ancient swami order in spirit, but is a new expression for an age of higher awareness. Its emphasis is on positive renunciation—a joyful expansion to Infinity. The vows of the new renunciate order.

Asha is author of Swami Kriyananda As We Have Known Him, a collection of more than 200 stories by people who have been touched by his teachings and spiritual friendship, often in remarkable ways. She is also author of Ask Asha: Heartfelt Answers to Everyday Dilemmas on the Spiritual Path, and Loved and Protected: Stories of Miracles and Answered Prayers. Her most recent book is Swami Kriyananda: Lightbearer, published in 2019.

Asha’s free video talks on YouTube and her audio recordings of classes are a spiritual lifeline for people of many faiths around the world. Thousands of students have received training from her over the past 40 years, and been immeasurably helped by her unusual insight and clarity.