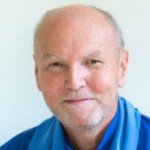 Nayaswami Jaya Helin and his wife Nayaswami Sadhana Devi are founding members of Ananda. For many years Jaya served as the general manager of Ananda Village. Later, he and Sadhana Devi helped start an Ananda Center on the East Coast of the U.S. For the past several years they have been helping to pioneer Ananda India in Delhi, and now in Pune.