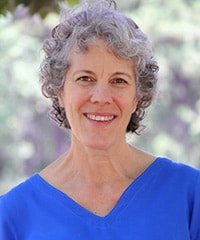 Maria McSweeney came to Ananda in 1976 and worked on the Ananda Farm. In 1986, Swami Kriyananda asked Maria and her husband Ananta to direct the Ananda community in Sacramento, where they served for 23 years as ministers and community managers.

In 2009, Maria and Ananta were asked to return to Ananda Farm at Ananda Village to restore it to organic production and to direct the Living with Spirit Ashram and summer programs for people between the ages of 18 and 30.