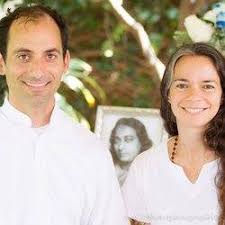 After reading Yogananda’s spiritual classic, Autobiography of a Yogi, in New York City, Narayan was inspired to learn Kriya Yoga and share the teachings of Self-realization. He was a founding member of Ananda NYC before moving to Ananda Village in Northern California, where he lived for six years.

He served at Ananda’s publishing arm, Crystal Clarity, and as a yoga and meditation instructor at the Expanding Light Meditation & Yoga Retreat. He co-founded Ananda Virtual Community–an interactive, online community with classes on yoga, meditation, and spiritual living.

Dharmadevi is a Certified Meditation Teacher and was part of the core group that started Ananda Los Angeles in 2007. Dharmadevi lived at Ananda Village for 2 years and helped launch Ananda Online Classes and the Ananda Virtual Community.

She has been practicing and teaching energy & holistic healing modalities since 2000 and especially enjoys sharing Paramhansa Yogananda’s teachings on health and healing.

Dharmadevi has worked extensively on the AKASH (Ancient Keys to Attaining Success & Happiness) series that Swami Kriyananda wrote while he lived in LA. Along with other teachers, she offers it around the LA area. She also offers energy healing sessions and spiritual counseling.