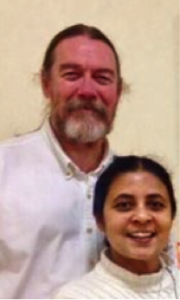 Peter Copley is a Certified Ananda Meditation and Yoga Teacher. He went to Edger Cayce’s ashram as a teenager and ever since was interested in meditation. He studied for his Masters of Divinity at the Methodist Theological School in Ohio and served as an assistant minister at First United Methodist Church in Lancaster, Ohio. He has been studying yoga philosophy with a personal practice of meditation since childhood.

More recently, Peter held positions in sales and was a construction project manager at the Center at Ananda Laurelwood. He currently manages school bus transportation for a local school district. He practices remaining centered through every day at work. He is a talented singer and uses music in his devotional practice. His quest is to find God.

Pooja Copley grew up in Kolkata, India. She completed her Bachelors Degree in Physics and Masters in Management from University of Kolkata, India. She started an active meditation practice in 2005 and went to Sarada Mission in India (part of the Ramakrishna Mission ashrams). She came to America with her twin sons, nine years old at the time, to work as a software engineer. She found Ananda and began practicing meditation on a daily basis. She is a founding member of The Center at Ananda Laurelwood and moved to this ashram in May 2011.

Pooja currently works as a software engineer and says her only goal in life is to become a simple, humble devotee. The Bhagavad Gita has been a part of her life since childhood, when her grandfather would chant the slokas with her as a small child.