A summary of discussion points from today:

1) How long do you think this phase of this pandemic will last and we can get things back to being more active (more “normal”)?

If we are incredibly lucky and we have a big effect on the growth, perhaps by end of May, but that is overly optimistic. More realistic would be 6 months (from beginning of March), or it could extend a year or more. We don’t know.

2) Is this the cataclysm Master foresaw for us? The answer from Jyotish and Devi and Peter was (I have paraphrased here) that it could be, since this situation is dramatically changing our way of life. Master said we would wind up with half as much, but be twice as happy. But whether it is “the” cataclysm Master referred to, we have to keep acting from our center and doing what is in front of us each day, regardless. Putting a label on it won’t help in any practical way.

News from Ananda worldwide – Ananda Assisi reports no illness there yet. Ananda India has a couple people who may be symptomatic. Jyotish and Devi will have conference call with India tomorrow.

People are reacting and are worried about the virus, but they are not making practical decisions. Panic shopping, but not social distancing. Many are also denying there is a real problem. Expect to see this and we have an opportunity to be calm and practical and a channel for higher consciousness. People are not able to adjust their thinking to how things are forever going to be different in the future – this is a global event that will change the world.

Peter’s example of water filling up the stadium: Imagine that you were in the very top level of a huge stadium and the doors were sealed and a drop of water fell on the pitcher’s mound. The water drops would double every minute – how long would it take to fill up the stadium with water? The answer is about 50 minutes. Up until about 45 minutes you would notice the water was collecting, but you wouldn’t realize you were in danger of drowning until the last 5 minutes. That’s when the explosive growth would happen. That is what it is like in a pandemic – we see what is happening but we don’t realize the danger until the last 5 minutes.

That is the dilemma in these situations. A month ago Peter was just beginning to look at the possibility of a pandemic and now the clinic is closed and they are only doing telemedicine visits. Nothing in person. Things are changing very rapidly.

Brazil – no testing, under reporting of cases

Australia – cases are doubling about every 3.5 days, expect over 20,000 by early April

We were hoping the “summer” areas may be not hit as hard, but it’s still not clear.

U.K. – have locked down the population now, although slow to move towards that. It appears people are not complying with the orders.

We have to have adaptive thinking and respond to the explosive changes that happen every day. For example, Spain – One day they announced everything was under control, the next day they declared a state of emergency and the next day they locked down the country. We don’t have the luxury to consider things over time.

Looks like the connection between China and Italy may be that the fashion industry was largely given to China and entire towns in Italy are Chinese who came to work and many may have brought the virus with travelling back and forth.

Hydroxychloriquine and Azithromycin combination drugs look very promising, but we don’t have the studies that normally we would look at. This combination of medication is beginning to be used.

It is important to get patients better – but also to reduce the time people can transmit the virus and get the transmission rate down to less than 1.

Outside cleaning help – not a good idea anymore

Handwashing can irritate the hands and create dry cracks which create another way for the virus to get in. Use lotion after washing. Vaseline type products are very greasy but can help. OTC hydrocortisone creams can also help.

Oregon stats can be found at: https://govstatus.egov.com/OR-OHA-COVID-19

In Spain and Italy there are some reports that ICU beds are being given to young people as a priority over the elderly. These are the decisions that have to be made in these circumstances where health care is overwhelmed.

0.1% of population are confirmed cases that will have immunity. “Herd” immunity is a long way away – need to have 50 – 80% of population to be immune.

In divine friendship in God and Gurus,
Lorna for Ananda Portland 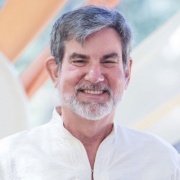 Dr. Peter is a graduate of University of California San Francisco Medical School and founder of the Sierra Family Medical Clinic, an award-winning rural community medical clinic near Ananda Village in Northern California. Dr. Van Houten is an Ananda Minister and a long-time meditator, has co-authored several books on the use of yoga for health problems, and lectures on the effects of relaxation and meditation on the brain and behavior.