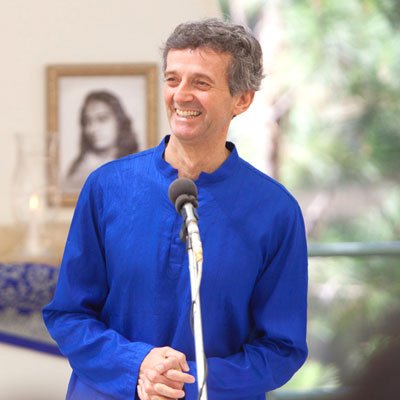 EXPLORING THE ESSENCE:
WHAT IS ANANDA YOGA®?

“Bones, muscles, movement I surrender now; anxiety, elation and depression, churning thoughts-all these I give into the hands of peace.”
Affirmation from Savasana – Corpse Pose

What do you say when someone asks, “What is Ananda Yoga?” Probably you give a brief and rather general answer, tailored to what you think he or she will understand. But what is Ananda Yoga, really?

There is no simple definitive answer, but in this article I’ll highlight the essence of it. I hope it will help your teaching as well as your practice. You might even find a surprise or two.

First, I’d like to banish a common misconception: Ananda Yoga is not limited to the asanas mentioned in the 14 Steps. A list of “permissible” postures would be a nice, easy definition of Ananda Yoga, but it would completely miss the point. Swami Kriyananda doesn’t work that way. He’s often said that his work is seminal. In the many topics he’s addressed—education, leadership, relationships, Ananda Yoga, etc.—he’s usually established a framework and a direction, leaving it to others to expand upon what he’s said and apply it practically.”

Similarly, AYTT is seminal training: we explore a limited but well rounded set of asanas that you can teach to most students. Our hope is that the training will enable you to expand on that set, to understand and teach other asanas from the Ananda Yoga perspective.

On the Other Hand …

That doesn’t mean, however, that “anything goes” in Ananda Yoga—or in any genuine tradition, for that matter. That would be chaos, which I think accurately describes the current American yoga scene. In the name of freedom, many yogis have committed themselves to eclecticism, lumping together techniques and approaches from many different traditions.

As I was remarking on this not long ago (while rolling my eyes, I admit), someone challenged me, “What’s wrong with that?!” I replied, “Nothing, except that it has no spiritual power.” True yoga is not just a collection of techniques; a genuine yoga tradition holds to a specific ray of divine grace because that ray is the source of its power. Things are done in a certain way—not out of dogmatism, but because that’s how one can best tune in to that ray. Spreading oneself over multiple traditions inevitably results in not being able to go deep in any of them.

Many people don’t like to hear this, of course, thinking that it limits their freedom. But as a chiropractor once said to me when I complained about what he said was necessary for my recovery, “Hey, I don’t make the rules!” In hatha yoga, eclecticism is fine if all one seeks is a physical workout, but “the rule” is that it takes focus to attain the highest.

The January 2001 issue of Yoga International reinforced this point: “The instructions [from the teacher] must flow from a genuine tradition, and you need to remain with the teacher who is fully connected to the tradition. If you are still working on the preparatory steps … it is all right to shop around. But if you wish to discover the inner dimensions of yoga that guarantee everlasting peace and happiness, you must study under the guidance of an experienced teacher and follow their instructions precisely.”

How does this apply to Ananda Yoga? Last spring, referring to the origins of Ananda Yoga in the teachings of Paramhansa Yogananda, Swami Kriyananda told me:

“Yoga’s purpose is spiritual, and since hatha yoga is the physical branch of Raja Yoga, hatha yoga must have a spiritual purpose. It can’t be just to give you a good body. …

“As I meditated on it, I realized that there is a very close connection between the positions of the body and the attitudes of the mind, and also of the soul. For example, a spiritual attitude is going to make you graceful, not awkward or hasty. It will lead you to relaxation, not tension. I also thought about how to use the postures to advance the purpose of the foundation of hatha yoga, which is Raja Yoga: to awaken the energy, loosen the spine so the energy can reach the brain more easily, bring it up the spine to the brain, and give you the experience of centeredness and upliftedness.”

That’s the key. Ananda Yoga practice is not just about getting “a good buzz,” as one person put it while enthusing about a particular technique. It’s about generating and increasing an inward and upward flow of energy in a safe, balanced, conscious way.

Therefore, every part of Ananda Yoga—including and especially one’s attitude—should contribute to this goal. All else is distraction (or worse). And yes, that means that some asanas and pranayamas don’t fit within Ananda Yoga because they don’t really take us toward this goal.

FROM VINE TO BRANCHES

But let’s focus on what does fit. Consider, for example, how some familiar aspects of Ananda Yoga take us toward the goal:

Energization: Mastering Energization takes our practice to an entirely new level. It’s the technique par excellence for increasing energy and our awareness of it. Only with awareness can we draw energy inward and upward—without awareness, all the energy in the world won’t do us much good. Energization also prepares our nervous system to handle more and more energy. It’s a prime contributor to the overall goal.

Sequence: Ananda Yoga routines are sequenced to bring energy inward and upward. Standing asanas come first, to center the awareness in the spine and begin to tune in to energy. Then we move to a variety of floor poses, designed to stretch and open the spine, and focus energy there. Inverted poses follow, to draw the awakened energy to the brain with the aid of “subtle gravity.” Deep relaxation in savasana then helps us internalize this energy in the brain (pratyahara, in Patanjali’s Ashtanga Yoga). Finally, meditation brings energy to the spiritual eye.

Pauses: Why do we pause in a “neutral” pose between “active” poses (e.g., in tadasana between two standing poses)? It certainly runs counter to most of the hatha yoga we see in our restlessness-addicted culture.

Swami was quite blunt when I mentioned this trend: “It’s not good yoga. If you hold a position, that’s when you can get into the consciousness behind that position. Constant motion isn’t the answer. It just becomes calisthenics.” He later added: “Ours is a path of constantly coming back to the center, to the spine. That’s the core of it, and you can’t do that if you’re always moving from one asana to the next. The time between poses is very important.”

If there’s one thing that’s unique about Ananda Yoga, it’s asana affirmations. It’s tempting to say, “Ah, here’s something definitive: without affirmations, it’s not Ananda Yoga.” When I asked Swami Kriyananda about this, he took a different stance:

“Obviously, the center of Ananda Yoga is not the fact of having affirmations. The center of Ananda Yoga is the way in which it helps our meditation, our stillness. Sometimes those affirmations can seem a bit childish, and I can see how people might resist doing them and still feel they were working with the energy and so on. Nonetheless, they’re a good thing, and they do help your consciousness. Beyond that I don’t know what to say; you’ll have to use your own intuition on the matter.”

I won’t try to sell you a once-and-for-all interpretation of this statement, but I will share with you the understanding I’ve gained so far (with luck, my understanding will improve over time): It’s not a question of whether we can do Ananda Yoga without affirmations. We can. The real question is, what leads us most quickly to our goal? Whatever that is, we’ll do it if we’re serious about the goal. Affirmations are not the goal; raising consciousness is the goal. But as Swami put it, affirmations “do help your consciousness,” i.e., they are a means to the goal. It seems clear to me that, in the absence of an equal or better tool, a serious Ananda Yogi will want to use the affirmations.

Remember, an affirmation is not an attempt to define (and therefore limit) our experience of an asana; it’s a tool for attuning ourselves to the essence of the asana. In the beginning, we might simply repeat it over and over, trying somehow to “catch the wave.” But our use of the affirmation will evolve as our practice deepens.

It’s as though the affirmation guides me through a doorway into a deeper experience of the asana. Once I’m through the doorway, I don’t need the affirmation anymore; I return to it only if my attention wanders. But make no mistake: it takes focus to unlock the door, and I’ve found Swami’s affirmations invaluable for that.

In teaching classes, I encourage use of the affirmations because they help students break the hypnosis of physicality, begin to understand the asanas, and bring their energy inward and upward. When their practice deepens, I advise students to let their feeling nature take over so that they may go deeper still—but as I said, not to discard the affirmation entirely.

Above all, what really defines Ananda Yoga is the vibration of Paramhansa Yogananda. Earlier I said that each yoga tradition is a “specific ray of divine grace.” In Ananda’s case, that ray comes through Yogananda. You experienced that ray when you took AYTT. Kriyananda drew upon that ray in order to develop Ananda Yoga. When I asked Swami how to be the best Ananda Yoga teachers we can be, his answer was basically, “Try to tune in to Master.”

It doesn’t matter whether you are a disciple or not. Masters will aid anyone who calls upon them. If you really want to feel and teach the essence of Ananda Yoga, call upon Paramhansa Yogananda. Ask for his guidance, and try to tune in to his consciousness. As you refine your efforts, you’ll not wonder what is and what is not Ananda Yoga. You’ll know.