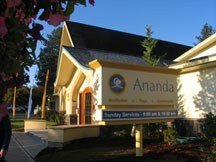 As of 7/11/21 Sunday services will again be open to in-person attendance. We encourage you to take measures to be safe. Masks are optional. After service satsang will be held outside. Services will also be live-streamed to Youtube Ananda Portland.

Initially, service will include chanting, music, readings from the Bible and Bhagavad Gita, affirmation, inspirational talk from a minister and meditation.

There is no Sunday School for children at this time.

We will be resuming the Purification ceremony and the Festival of Light as soon as we are able.

Ananda is non-denominational, non-sectarian, and open to all. We share the universal truths of inner communion and ancient yogic philosophy brought to the west by Paramhansa Yogananda.

FAQ:  Why do the ministers where different colors? Do the colors mean something?

ANSWER: When performing ceremonies and conducting Sunday Services, Ananda ministers wear robes that indicate the role they have taken on and the vows they have committed to.

Ministers serve Ananda in a variety of ways, sometimes teaching and being in visible leadership positions, sometimes “behind the scenes.”

Light bearers are ministers who conduct ceremonies and services in addition to serving in other capacities. They usually wear white robes with a draped shawl during services.  Light bearers who have taken a Nayaswami vow of renunciation wear blue as an affirmation of their committment to embrace the spiritual life. Their ministerial robes are also blue. (Learn more about the Nayaswami order.)