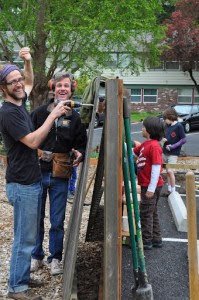 When I first came to Ananda in 1978, I had many misconceptions about the spiritual path. I thought the only thing we needed to work on as devotees was our depth and amount of meditation. I was more than a little surprised at the emphasis that was placed on serving others. Swami Kriyananda would often quote Yogananda saying, “Remember, service is joy!” Frankly, when he would say that, I’d think, “Well, I guess that those who can’t meditate need something to do.” It shows how poorly I understood the importance of service.

After I’d lived at Ananda for about a year, I had to leave to finish my medical training, since I’d taken a year out immediately after graduation from medical school. Just before leaving to start my internship at a busy county hospital in central California, I had a chance to meet with Swami to ask for his advice.

I had been working very hard on meditation that year while I was living at Ananda. Part of my reason for talking to him was to ask him about the increased the amount of Kriya Yoga I was doing daily. In this powerful technique, the devotee moves subtle energy up the spine into the brain. A beginner usually starts with 14 repetitions, twice a day. When I asked Swami about my Kriya practice, he said, “It would be best to keep your Kriyas at about 36 repetitions twice a day for the next year.” I was rather shocked, because I was already doing the maximum of 108 repetitions of the Kriya technique twice a day!

My internship started a few days later. It was far tougher than I’d expected it to be. Several other interns in our group quit early, and the rest of us went through the year extremely short-staffed. My work weeks were typically 80-100 hours. I was so sleep-deprived toward the end that if I sat down or simply stopped moving and leaned against a wall, I’d fall asleep immediately! When I moved out of my rented apartment at the end of the year, I noticed a greasy spot on the wall next to where I sat when I meditated, and I realized it was where my head rested against the wall when I’d fall asleep. I doubt my meditation lasted more than 15 minutes anytime in that entire year.

But a surprising thing happened during the internship. Being so exhausted and stressed for most of the time, I prayed for God’s help a lot. While caring for my patients, my simple prayer was: “Lord, don’t let me screw up and hurt this poor person. You must help me!” Many times during the year, I prayed desperately and felt God’s help, and then the right thought or diagnosis would come to me.

When I returned to Ananda at the end of my internship, I was a physical wreck, and I felt like I needed to start over from scratch with my meditation. I was doing about 14 Kriyas twice a day, which is what a beginner does, and my meditation wasn’t very deep at all. But I bumped into Swami, and he was asked how I was doing, and I shared with him a little summary of my internship year. He said he was sorry it had been such a tough year, and then he added, “Oh, and you should really push ahead with your meditation. I’d suggest that you do 108 Kriyas twice a day starting now.”

I must admit I was rather confused by his advice. But when I meditated on it, I realized that my internship had not only really humbled me, but that I’d also learned about the importance serving others with the thought of God. Finally, I had understood by my own experience the importance of service to others as part of our spiritual development. And I’d learned that meditation and service are both part of the spiritual path. In fact, our meditations really should be done with an attitude of service.

I’ve always been grateful for the advice Swami has given me over the years. I particularly appreciate that he has helped me understand from my own experience and by his example that service is joy!