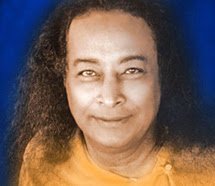 Paramhansa Yogananda, 1893 – 1952, was the first yoga master of India to take up permanent residence in the West.

Yogananda arrived in America in 1920, and proceeded to travel throughout the United States on what he called his “spiritual campaigns.”

Hundreds of thousands filled the largest halls in major American cities to see the yoga master from India. Yogananda continued to lecture and write up to his passing in 1952.

Yogananda’s initial impact on the western culture was truly impressive. But his lasting spiritual legacy has been even greater. His Autobiography of a Yogi, first published in 1946, helped launch a spiritual revolution in the West. Translated into more than a dozen languages, it remains a best-selling spiritual classic to this day.  Read it online    Buy it

Yogananda’s message was nonsectarian and universal. Before embarking on his mission to the West, he received this admonition from his teacher, Swami Sri Yukteswar:

The West is high in material attainments, but lacking in spiritual understanding. It is God’s will that you play a role in teaching mankind the value of balancing the material with an inner, spiritual life.

THE PATH OF SELF-REALIZATION

The true basis of religion is not belief, but intuitive experience. Intuition is the soul’s power of knowing God. To know what religion is really all about, one must know God.

—Paramhansa Yogananda from The Essence of Self-Realization

The lasting contribution brought by Yogananda to the West is the non-sectarian, universal spiritual path of Self-Realization.

Yogananda gave this definition to the term Self-Realization:

Self-Realization is the knowing in all parts of body, mind, and soul that you are now in possession of the kingdom of God; that you do not have to pray that it come to you; that God’s omnipresence is your omnipresence; and that all that you need to do is improve your knowing.

As the means of attaining this exalted spiritual state Yogananda initiated his followers into the ancient technique of Kriya Yoga, which he called the “jet-airplane route to God.”

The path of Kriya Yoga, which combines the practice of advanced yogic techniques with spirituality in daily life, is a system of techniques and practices that can be learned through Ananda Portland as well as other Ananda Centers and Ananda Worldwide.  more about Kriya Yoga

Yogananda dreamed of places where people of all walks of life, not only monastics, could devote themselves to living a life dedicated to “simple living and high thinking” by applying the teachings of yoga to every aspect of their lives.

“Take the best advice I can give you,” he said. “Gather together, those of you who share high ideals. Pool your resources. Buy land out in the country. A simple life will bring you inner freedom. Harmony with nature will bring you a happiness known to few city dwellers. In the company of other truth seekers you will find it easier to meditate and think of God.

And on July 31, 1949, at a gathering in Beverly Hills, California, he solemnly proclaimed:

“This day,” he thundered, punctuating every word, “marks the birth of a new era. My spoken words are registered in the ether, in the Spirit of God, and they shall move the West.… Self-Realization has come to unite all religions… We must go on — not only those who are here, but thousands of youths must go North, South, East, and West to cover the earth with little colonies, demonstrating that simplicity of living plus high thinking lead to the greatest happiness!”

Ananda has become the first successful implementation of Yogananda’s ideals. Over the years it has grown into a dynamic international movement with thousands of members worldwide.

The Ananda Portland Temple and Teaching Center has a boutique which includes books written by Yogananda and his direct disciple, Swami Kriyananda, and others. We also carry audio talks by Yogananda, pictures and gift items.

VIDEO: THE LIFE OF YOGANANDA

A brief biography of the great master.

Learn all about Yogananda’s dream of World Brotherhood Colonies, including articles he wrote about them, quotes from lectures, personal advice he gave, and more.

Swami Kriyananda was a direct disciple of Yogananda who spent 3 1/2 years being trained by the Master. Read about Kriyananda’s time with Yogananda in The New Path, Kriyananda’s autobiography.

Enjoy this online photo album. Many unusual photos, mostly from his trip to India in 1935 – 1936.

AUTOBIOGRAPHY OF A YOGI (ORIGINAL 1946 EDITION)
THE COMPLETE ONLINE EDITION

THE NEW PATH: MY LIFE WITH PARAMHANSA YOGANANDA
BY SWAMI KRIYANANDA, ONLINE EDITION

Many consider this book by Yogananda’s disciple to be like a sequel to the Autobiography of a Yogi. There are hundreds of stories and personal experiences shared by Kriyananda about his Guru and spiritual teacher. The print version is also available at the Ananda Portland Boutique and Crystal Clarity Publishers.