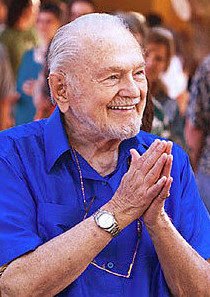 A BRIEF BIOGRAPHY
Watch a beautiful video about Swami here.

There is a peace and quietness surrounding Swami Kriyananda that give a hint of his spiritual stature.

Many times I listened to him speak, and have always come away feeling refreshed and energized. It is not only his lectures, teachings, and books that shed light on areas of darkness and confusion in people’s lives.

Above all, it is the example of the man himself, the peace and calm that surround him, the spiritual power that emanates from him, pointing the way to each person’s own inner path to enlightenment.

Swami Kriyananda (J. Donald Walters) was one of the foremost proponents of yogic teachings in the world today. In 1948 at the age of twenty-two, he became a disciple of the Indian yoga master, Paramhansa Yogananda. He spent the rest of his life sharing the teachings of his guru and doing everything he could to fulfill Yogananda’s mission to the world. He peacefully left his body on April 21, 2013.

At Yogananda’s request, Swami Kriyananda devoted his life to lecturing and writing, helping others to experience the living presence of God within. He taught on four continents in seven languages over the course of over 60 years. His teaching, audio and video recordings of his talks and music, and his many books translated into 28 languages have touched the lives of millions.

Swami Kriyananda took the ancient teachings of Raja Yoga and made them practical and immediately useful for people in every walk of life. His books and teachings on spiritualizing nearly every field of human endeavor include business life, leadership, education, the arts, community, and science. He wrote extensive commentaries on the Bible and the Bhagavad Gita, both based on the teachings of Paramhansa Yogananda.

Swami Kriyananda is also known as the “father of the intentional communities movement,” which began in the United States in the late 1960s. Inspired by Yogananda’s dream of establishing spiritual communities, he founded in 1968 the first of what are now nine Ananda communities worldwide. They provide a supportive environment of “simple living and high thinking” where over 1,000 full-time residents live, work, and worship together.

The time has come for people to live lives of even higher dedication than that which inspired monks and nuns of the past.It is time to direct our spiritual awareness also into matter, into everything we do: work, education, family life, friendship, communications with strangers, the way we build our homes — to all the most mundane, practical aspects of daily human life.

People need to become God-centered from within, and from that center to see God everywhere, in everything.”

A monastic almost all of his adult life, Swami Kriyananda was a Swami of the Giri (Mountain) branch of the ancient Swami Order, as was his guru and his guru’s guru, Swami Sri Yukteswar.

FOUNDER OF ANANDA
FULFILLMENT OF YOGANANDA’S DREAM OF SPIRITUAL COMMUNITIES 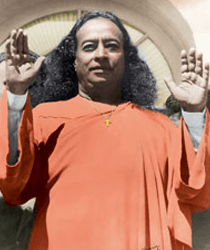 “This day marks the birth of a new era. My spoken words are registered in the ether, in the Spirit of God, and they shall move the West.

“We must go on — not only those who are here, but thousands of youths must go North, South, East, and West to cover the earth with little colonies, demonstrating that simplicity of living plus high thinking leads to the greatest happiness!”

Since his youth, Kriyananda had dreamed of utopian communities. But few shared his enthusiasm, and he gradually put his dreams aside. He was surprised, then, to discover Yogananda speaking often about the need for ”World Brotherhood Colonies“ as places to foster spiritual attitudes and friendly cooperation.

It was at a garden party on July 31, 1949, that Yogananda gave a talk quoted above that changed the course of Swami Kriyananda’s life. “Moved to his core” by the tremendous energy with which Yogananda made his pronouncement, Kriyananda later wrote: “Deeply, I vowed that day to do my utmost to make his words a reality.”

The opportunity to do so came in 1967. With the help of a few friends and many miracles, Swami Kriyananda was able to purchase a small piece of land in the Sierra Nevada foothills near Nevada City, California.

Thus was started a spiritual community, which is now known as Ananda Village. More than 300 people live in this intentional spiritual community dedicated to Yogananda’s ideals. A variety of Ananda-owned and private businesses form the economic backbone of the community. The Expanding Light retreat, a publishing company, schools for children, and a grocery store are among the activities on the rolling 1,000 acres in the rural Sierra foothills. Visitors are welcome year-round: (800) 346-5350.

Other Ananda communities have developed over the years to include Ananda Palo Alto, Ananda Sacramento, Ananda Portland, Ananda Seattle, Ananda Los Angeles, Ananda Assisi in Italy, and Ananda India near Delhi and Pune. Each community has a spiritual focus (a teaching center and temple) and a community (homes where members live).

Swami Kriyananda’s inspired leadership is at the heart of Ananda’s success. He uplifted and encouraged people through personal example, spiritual counseling, writing, lecturing, music, and prayer.  He trained others to assume leadership responsibility in much the same way: free from egoic motivation, always placing the spiritual needs of others foremost in all decisions.

Swami Kriyananda will always be the spiritual guide of Ananda. Nayaswami Jyotish Novak is his successor as the Spiritual Director and Dharmacharia of Ananda Sangha Worldwide.

Watch a beautiful video about Nayaswamis Jyotish and Devi here.

We often receive questions from students asking about the difference between Ananda and Self-Realization Fellowship (SRF); about Ananda’s authority to disseminate Paramhansa Yogananda’s teachings; about Swami Kriyananda’s role at Ananda and his role in Paramhansa Yogananda’s mission; and, finally, about two lawsuits that involved Ananda: the SRF vs. Ananda religious freedom lawsuit and the Bertolucci lawsuit alleging sexual harassment by Ananda and Swami Kriyananda.

We have compiled answers to each of these questions here. If you have more questions or would like further clarification, we are happy to answer.

For more about Swami Kriyananda, visit the comprehensive website, SwamiKriyananda.org.
Several books are available in the Ananda Portland Boutique and through Crystal Clarity Publishers, including The New Path, Swami Kriyananda’s story of his spiritual quest and his discipleship to Paramhansa Yogananda.